The Cheetah is a marvellous animal, categorized by a slender body, a long tail, a fur coat with black spots. Cheetahs are widely acknowledged as the fastest animals on land. Their narrow body and long legs enable them to run at a great speed which makes them a true marvel of evolution. They belong to a unique genus, Acinonyx, and, are the only living species belonging to this genus. 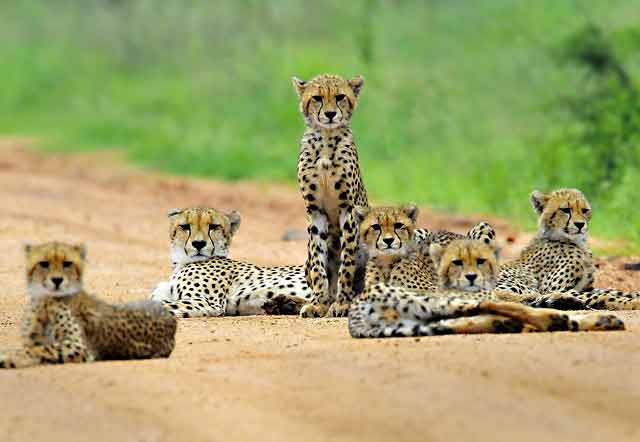 A cheetah mother and her cubs.

Cheetahs are a part of a subfamily known as Felinae within the larger, Felidae family. Some other members include the domestic cat, jaguarondi, lynx and cougar. The members of this cat family are smaller as compared to some of the “big cats” like lion, tiger, leopard and jaguar belonging to another subfamily known as Pantherinae.

An adult cheetah weighs about 88 lb. (40kgs) to 140 lb. (65kgs). The total body length on the adult cheetah ranges from 45 inches (115 cm) to 53 inches (135 cm). The measurement of the tail is usually about 84 cm (33 in). Although there are no major variations in sizes, the male cheetah is slightly bigger than the females. In comparison with Leopards, Cheetahs have a shorter body but are taller and have a longer tail. Another notable characteristic is the size of the spots. The spots measure between 2 cm to 3 cm. A Cheetah cub at birth is very small, weighing 150 to 300 grams.

Cheetahs are found on grasslands and semi-dessert regions. Their population is primarily centred on Africa. More precisely, in the Eastern, South Western and Central parts of Africa. Some of the Cheetah population is found in South West Asia although currently, they are small in numbers. A few decades ago, they were widespread in the Middle East and Asia. Cheetahs thrive on expansive landscapes that offer abundant prey.

Cheetahs are carnivores. They have long teeth and sharp molars that are suitable for hunting animals and cutting through flesh. Their diet consists mostly of mammals weighing less than 88 lb. (40 kg). These include the gazelles, impalas, wildebeest calves, antelopes and small animals like hares and even birds. Their diet depends on the area they live in.

Cheetahs make use of tall grass for camouflage while hunting. They are more active during the day and hunt in the mornings and late afternoons. It is said that only 50% of their chases result into successful capturing of their prey. Their chases usually last up to 20 to 60 seconds. They kill with a bite on the neck and eat swiftly before bigger wild animals appear.

The Cheetah is a vulnerable species as they fall behind on adaptability. Cheetahs are listed among endangered animals and need to be protected. Currently the approximate number of Cheetahs in the wild is 12,400.